A fine day today, with only a few spots of rain, but with a gentle breeze. Digging continued much as yesterday, but a student was co-opted on to the Finds Team to hold the reflector for ‘Bob’. This enabled Chris and Ruth to concentrate on coping with finds and recording them at the same time. This worked very well as it meant that we actually had proper coffee and lunch breaks at the same time as everyone else and we finished almost at the same time at the end of the day! 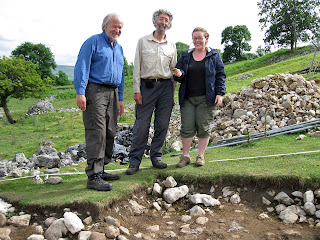 Emily, Roger, Don & mortarium - smiles all round ! © Ruth Spencer
Two great excitements of the day were two finds of small pieces of lead – this was thanks to Michelle and her metal detector; and in the afternoon Emily found a piece of a mortarium. The smiles on Don’s and Roger’s faces when they saw this had to be seen to be believed! Altogether a good day!
Ruth Spencer
Posted by Upper Wharfedale Heritage Group at 22:01