Another overcast morning with the threat of heavy showers.


Work continued on the test pits and a new 2½ metre square trench (DM) was opened just south of the finds tent in a level area between two hollows, to see if any structure occupied this area.

The showers then started arriving in rapid succession making work difficult, and in the case of the main trench, downright dangerous on the slippery limestone. Don decided that DF should be abandoned. 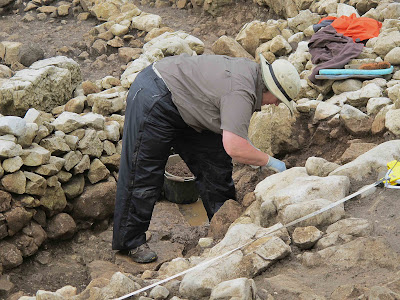 The unstoppable Michelle
© Jane Lunnon
Michelle, however, soldiered on in the bone trench; how do you stop her working ?


Several of the trustees from the Yorkshire Dales Landscape Research Trust paid the site a visit at lunchtime, and were given a guided tour by Roger before retiring to the “Dining Marquee” - which bore a very close resemblance to an emptied equipment ex-army tent!

By 2 o'clock it was obvious that any further work was not going to be possible, so the order was given to retreat. 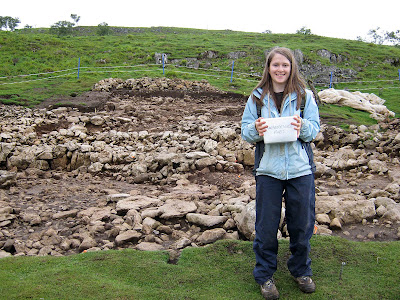 Jennifer with the day's box of finds
© Jane Lunnon
Today we said goodbye to Pauline and Jennifer, who had apparently enjoyed themselves despite the rigors of the Dales weather.