The Finds Team were supplemented by Pauline today which was all to the good as the finds kept coming thick and fast. These were predominantly animal bones, including some rather large examples, and more teeth. 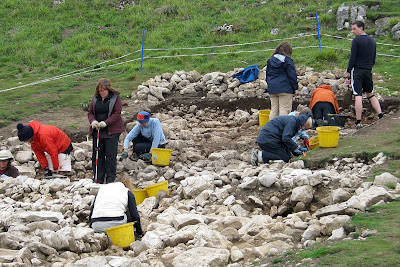 Ruth came to dig for the day and Helen also visited us and did some sketches until the cold forced her to retreat.
Don and his team of students continued with their surveying further down the hillside and the alidade made its first appearance.
Michelle's metal detecting revealed some more pieces of corroded iron and another piece of lead. The lead looked just like a piece of limestone and not until it was handled was it obvious that it was not stone. It does rather beg the question as to how many other pieces may have been mistaken in the past. It just goes to show that metal detecting in the right hands is a very useful tool.
Alan Williams, UWHG Webmaster
Posted by Upper Wharfedale Heritage Group at 15:18