A delayed start this morning due to the steady rain. It was still raining when we met on site at 10.30am, so Roger took the students on an expedition to see another part of the site. Michelle continued to play with her new metal detector, finding all the nails we lost last year! 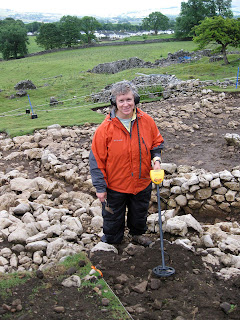 Michelle with the detector © Ruth Spencer
The rain eventually stopped and digging recommenced. The site is looking beautifully clean now and it was exciting to see at least 2 possible post holes emerging from just below the lowest wall. Finds are also beginning to emerge from context 001 – the area which was under the stone pile last year.

The improvement in the weather also saw the arrival of Chris who is taking over from Helen (Steele) on the Finds Team. He very quickly became involved and it was good to have a third member in the team as the finds suddenly came thick and fast. Helen left us soon after lunch-time, so Chris and Ruth were kept pretty busy for the rest of the day.