Despite heavy overnight rain the day started off dry. The test pit, DJ, at the bottom of the steep slope below the tents was drawn in section and then back filled. The Newcastle students were set on opening up another test pit (DK) to the north of the DJ test pit.

Don took his surveyors to the other side of the wall where they surveyed two long building platforms and associated walls.

Roger caused a bit of a stir amongst CHW veterans as he started to dismantle the wall below the “bone trench” but this proved to be only a minor incursion. 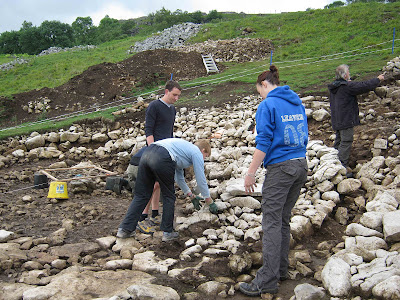 Heartstopping moment for dig veterans as part of the curved wall is dismantled
© Jane Lunnon
Michelle continued her work in the “bone trench” uncovering some rather impressive “flooring”. 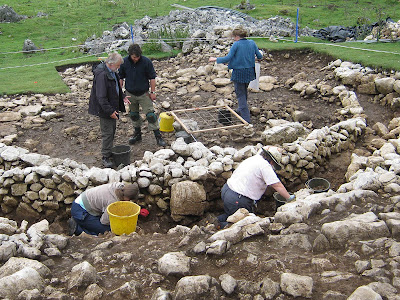 Michelle and Jennifer working hard in the old bone trench,
while Roger instructs Aidan in planning techniques
© Jane Lunnon
The number of finds seems to be decreasing, even to the extent that the now partially redundant Finds Team were redeployed to actually do some digging. 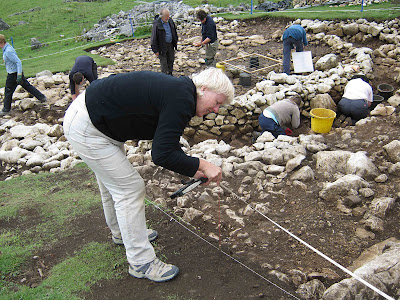 Roger had just started giving a talk on site photography when the promised rain arrived with a vengeance, which resulted in a very rapid packing up and an early finish.