Roger took the day off and left Don to crack the whip. Work continued on rather slowly with a reduced work force, and the absence of Michelle, in particular, meant that the Finds Team had a leisurely day.

A rather fragile rim sherd of probable Romano-British pottery was found near the trench edge which should supply some more valuable dating evidence.

Bob's battery died in the afternoon which should not have been a problem until it was realised that Roger had the spare battery back in Kettlewell! Finds tags were left in the trench until tomorrow and fingers were crossed that the electric fence would keep out the sheep. 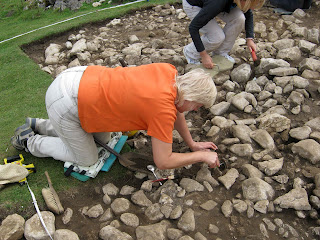